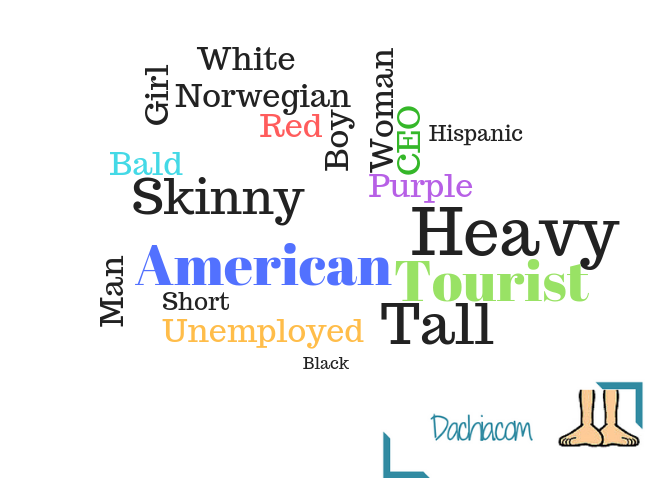 A couple years ago, I was talking to a hospitality manager who was telling me about a couple meetings he was having that day. One group was tourists from China. He called them Chinese and then caught himself and was sorry if he said something racial or prejudiced.

I looked at him with a questioning face and he said because he called the Chinese.

I said, “ARE they Chinese?”

“Then you can call them Chinese.”

Now you might be asking why call them anything at all? Well, I’ll tell ya. Because all words are useful and have their place. He was expecting three separate groups that day. And each had different directions as to what they would do before they met with him. One was having lunch, one was getting a tour and the third was going to meet with him immediately as they had a plane to catch.

There is nothing wrong with describing a group accurately. If all three groups happened to be from China, then we would need more descriptors. But if you have a Ladies Auxiliary, Chinese Tourists and a basketball team, I think it likely that an associate with jut that cursory information would be able delineate which group was there and then to direct them.

The idea that using any sort of adjectives that have to do with physical features is prejudicial or racial, is utter nonsense.

There is a scene in Criminal Minds, one of the early seasons, that I’m often reminded of.

Mayor Hughes: What do you think is gonna happen if I go to the press and tell them the killer is black?

Morgan: Hey, the best way to stop all this is to find the killer. We just gave you a way to do that.

Gideon: It’s not racial profiling. Racial profiling is targeting suspects because of their race. We gave you a complete profile which includes race.

I’m also reminded of a friend posting on social media about being nearly assaulted by a man in the parking lot wearing a grey hoodie. I asked if the man were black or white. And you’d think I opened up a KKK manual.

“How can you ask such a thing?”
“OMG, prejudiced much?”
“How can that possibly matter?!!”
etc
etc

And I responded, “well, it matters because if the assaulter was black and I see a white man in a grey hoodie in the vicinity, probably not going to call the cops. But the vice versa is also true. If the subject were white and I see a black guy in a grey hoodie, same outcome. You see how that works?”

If I’m serving a group of people and the taller one asks to speak to the chef, it really is ok to refer to him as the teller guy. Or if there are 4 people and one is a woman, you can refer to her as ‘the woman’.

Descriptions, by themselves, separate from intonation and emotion, are useful. That’s why we have them.

All have their place. Let’s not cripple our communication by rejecting words. Particularly large groups of them.