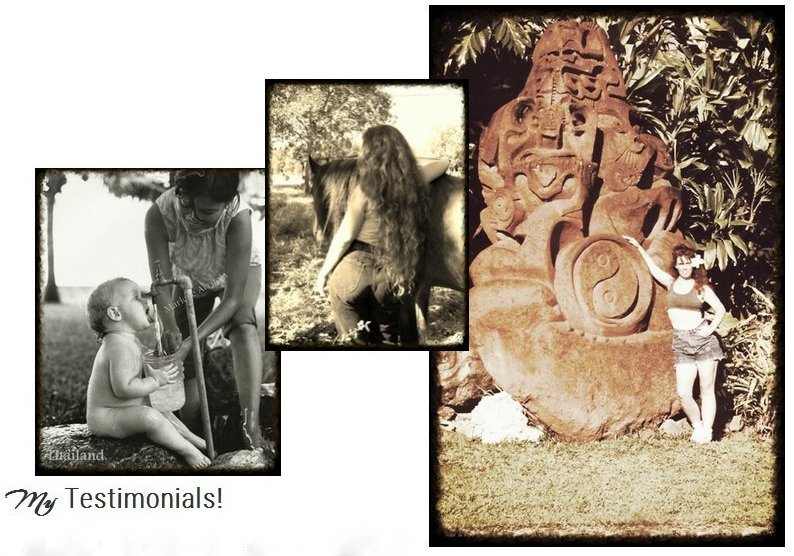 Real quotes from real people who really know me. I didn’t even have to pay them… well, most of them.

Dachia is an amazingly dynamic and uplifting person – her smile and enthusiasm is INFECTIOUS! She has many terrific insights from life experience, and is able to apply her learnings with ease to a multitude of situations. She is both non-nonsense and compassionate, which is a rare, and valuable combination. She is worth getting to know and engaging – she always has something wonderful to offer.

Gypsy: “a member of a people scattered throughout Europe and North America, who maintain a nomadic way of life in industrialized societies.” — Dictionary.com

You might scratch your head upon hearing “Dachia Evolutionary Gypsy” for the first time–It’s a mouthful. I understand. But this triumvirate combination is quite an accurate way for Dachia to describe herself…

Dachia’s family was two miles away from my own while growing up. They raised horses, as did we. They loved animals, as did we. They were considered eccentric by their neighbors, as were we. Also, we rode the same bus to school – you get to know people intimately from riding the same bus. And like most busses, we had our bullies in the form of incorrigible eighth graders that picked on the rest of us. After Dachia’s family moved to town, a bully decided to pick on her and her brother. I remember this vividly. She’s not a big person but she fought back like a wildcat while many of us had resigned ourselves to the abuse. It’s stuck in my memory these nearly forty years since. Was it the red hair or the fatigue from cleaning boxstalls before school?? I do not know. But one thing is for certain – that tempestuous rebellion and searching has remained unfailing inside her throughout her life.

After years of lost contact and both of us travelling widely, I came to correspond with Dachia via social media—It was a refreshing pleasure. She’s evolved through her travels (D+E+G above). We have heated debates on any and all topics and she is that same fifth grader pushing back against a bully. Some grand olde party friends and I were decrying a pesky religious group and Dachia rebutted promptly and intelligently. Her passionate arguments nearly got me to change my stubborn mind. Nearly! That’s a tough nut…

There are few like her–the cliché is a “breath of fresh air.” But the cliché about clichés is that they are right most of the time. In all seriousness, consider yourself fortunate to know Dachia, as am I. She is all the things her resume says, and far more.